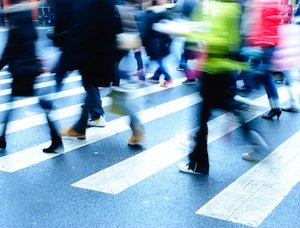 Given there are so many pedestrian accidents involving cars, trucks, bicycles, trains and motorcycles, the responsibility of the one at fault tends to point at a driver of the vehicle rather than faulting the pedestrian. However, clearly that is not always the case. Pedestrians have been found to be at fault when walking into a street between parked cars, or walking or running into a street, road or highway where it is either unsafe to cross or where there are controls warning against walking such as at a railway crossing or when a pedestrian walks outside of a designated and marked crosswalk.

Whether the pedestrian or the motor vehicle operator is at fault or negligent may be considered based on local and/or state law. In the common law, a person is said to be negligent if he or she has acted in a way that was deemed to be a failure to act with reasonable care for the safety of others where there is a legal duty to act, like obeying a traffic sign. In short, negligence is when a person acts in such a way where there is a duty to act in a certain reasonable fashion, that duty is breached by acting in a different way that is deemed to violate that duty of care and that particular act or omission to act causes harm, injury or death to another.

So the questions in a pedestrian injury case are many but could include some of these; Was the driver of the motor vehicle that injured the pedestrian negligent by speeding, choosing not to obey a traffic signal or traffic light, failing to stop when the pedestrian is in the crosswalk or has the right to pass? There are severe cases of alcohol use, speeding, leaving the scene of a pedestrian injury where the driver has not only acted unreasonably, but these acts may be criminal giving rise to an arrest with criminal charges that may include prison.

Kreisman Law offices handled a horrific case where our client was critically injured by a drunk driver who left the scene after striking and nearly killing our client who was a lawful pedestrian. The driver was charged with a series of traffic violations one of which carried a prison sentence. During the course of the case, the deposition of this man was taken at the prison where he was serving time for drunk driving that caused the near death of a pedestrian. We had handled other cases where there has been a pedestrian death caused by an impaired driver.

Most parents warn children to look both ways before crossing a street. That’s excellent advice even for adults. In Chicago where bicycles are widely used, it is important to look both ways, not just for cars and trucks but for speeding or hurrying bicyclists, bike messengers and the casual bike rider who may be proceeding on a one-way street. Caution is always the best way to cross a street.

If you or someone you love has been injured or killed in a pedestrian accident, please call us for an immediate free consultation. With our years of experience and trying and settling pedestrian accident cases, Kreisman Law Offices provides the best possible services to our clients and have achieved unsurpassed results. Please call us 24 hours a day at 312.346.0045 or toll free at 800.583.8002 for a free and immediate consultation, or complete a contact form online.

Chicago Personal Injury Lawyer Blawg - Pedestrian accidents
Contact Us
Practice Areas
Client Reviews
★★★★★
“We were devastated when our 31 year-old son was killed by a negligent driver. Kreisman Law Offices did everything to help us through this very difficult time, including coming out to the house several times which was a comfort. My wife and I were extremely pleased with Mr. Kreisman’s compassion and care for this very tragic and troubling time.” C.B.
★★★★★
“Bob Kreisman did everything possible in handling the trial of this case. It was devastating that I traumatically lost my leg above the knee in this truck accident. However, it was not an easy case to win. His staff was so prepared for the trial that it was not surprising that the settlement offers continued to rise until we finally accepted the multi-million settlement while the jury was still deciding the case. My wife and I were delighted that we could secure our future with this settlement. We thank Mr. Kreisman and his incredible staff for working so hard for our benefit.” T.P.
★★★★★
“My mother died because doctors dropped the ball. I called Robert Kreisman and he immediately set up an appointment for my entire family. We met at his offices and I was very comfortable that he would do the best for my dad and my brothers. He spent hours with all of us in preparing for depositions and he hired top notch experts, all of which contributed to an incredible settlement before trial. I know that he is dedicated to his cases and particularly to the people he works for and the people who work with him. He continues to be generous in contributing annually to my mother’s memory and to make known to the public the signs and symptoms of brain tumors.” V.S.
★★★★★
“My dad was ignored and mistreated at the nursing home that we placed him in. It didn’t take long for us to realize that we made a big mistake, particularly after my dad developed these terrible bedsores. We transferred him as we were contacting Mr. Kreisman. He was referred to us by a lawyer we have known for a long time and respect his opinion. Mr. Kreisman and his staff worked tirelessly to resolve this case. We were fortunate to have his services and will recommend him to anyone.” T.J.
Submit a Law Firm Client Review