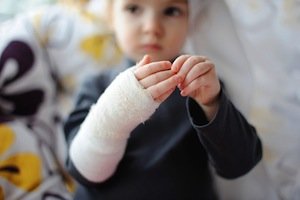 As parents we have an unconditional love for our children. If you or a loved one had the unfortunate experience of an injury to a child or death, it is one of the most poignant of losses.

When it comes to an injury or death to a child, the parents are entitled to bring two separate and independent claims. One would be the child’s claim because of physical or mental injury, including pain and suffering, future pain and suffering, medical expenses, future medical expenses and income loss to the child. Under the law, a child is anyone who is under the age of 18. Additionally, lawsuits can be brought on behalf of the minor through the parent or “next of friend”. This could also include a guardian appointed by a court.

A parents’ claim would include the medical expenses associated with the injury to the child up to the age of 18 and the loss of services for the injury or death of a child.

Children are injured in all kinds of different ways.

It is a fact that every single day children are injured or killed in preventable accidents. On average in the United States, children between the ages of newborn to 19 years die at the rate of 12,175 per year. The frequency of deaths in this wide age group differs according to gender by example in that males are almost twice as likely to die as are females. The leading cause of death of children less than one year is suffocation. Suffocation accounts for two-thirds of the deaths of children less than one year old.

The rate of children deaths also is varied by the region one lives in. For example, child deaths were lowest nationwide in the northeast, but deaths due to fires or burns were highest in southern states. The same could be said of deaths in motor vehicle crashes where children died at higher rates in southern and upper plains states compared to the rest of the country.

Because so many injuries and deaths of children are preventable, it is vitally important that parents, teachers and caregivers are accurately aware of the risks of injury and the precautions to take to prevent injury. At an early age, children are prone to put objects in their mouths. These objects, although part of toy or play thing may be small enough to swallow that can cause choking and suffocation. These objects must be removed from the grasp of a child, particularly those most prone to this—babies 6 months to 12 months old.

Other common injuries that occur at the home are falls, burns or poisoning. There are many household hazards to children including fireplaces, electrical outlets, cleaning fluids and stairs. To prevent injury or death to a child, a parent must remove these items that are most likely to put the child at risk. Cover electrical outlets, put up barriers or gates to prevent falls and make sure cleaning supplies are put in child-proof cabinet or completely out of reach.

Children can be injured in an unlimited number of ways. Preventing injury or death is certain if all due care and caution is observed by parents, guardians and caregivers.

If you or someone you know or loved has the unfortunate experience of having a child injured or killed by the negligence of another, including by product manufacturers or by any other means, call Kreisman Law Offices who has more than 40 years of experience handling catastrophic injury and death cases for individuals and families. Contact our Chicago office at 312.346.0045 or 800.583.8002 or by email at bob@robertkreisman.com for an immediate free consultation, or fill out our contact form.