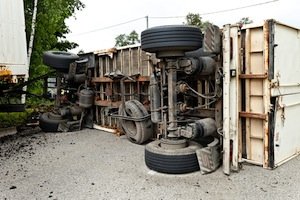 A woman in her 50s died in a car crash in Wheeling, Illinois in January 2013 when her car collided with a semi-truck making a left turn. The driver of the truck was not injured.

The incident is typical of what often happens in car-truck collisions. The driver of the smaller vehicle is killed, but the truck driver walks away from the accident.

Any accident involving a large truck and a smaller vehicle or pedestrians often has tragic consequences. Trucks vastly outweigh automobiles. A big truck can weigh more than 80,000 pounds and can be up to 75 feet in length.

According to the United States Department of Transportation (USDOT), more than 200 fatal truck crashes occurred in 2005. The department also reported that 8.5 million large trucks are on the nation's highways. In Illinois, there were 170 fatal truck crashes in 2005. The state with the highest number of truck fatalities was Texas, with 427 that year.

More truck accidents occur in rural areas (68 percent) rather than in urban regions (32 percent). The Department of Transportation also reports that the majority of all fatal truck accidents -- at 78 percent occur on weekends.

Truck driver fatigue causes a significant number of truck accidents, according to the DOT. After conducting a study on truck drivers, the department offered these findings:

Driver drowsiness episodes were eight times more likely between midnight and 6 a.m. than during other times of the day or night.

Drivers slept for only about five hours, which was two hours less than what they said was best for them.

Drivers were not very good at assessing their own levels of alertness.

Truck accident cases differ from a car crash claims primarily because of the unique circumstances arising from these types of crashes. For example, tractor-trailers oftentimes can "jack-knife" so that the two parts of the vehicle are at a 90-degree angle. The tendency for a truck to jack-knife may occur because of front brake issues. Many truck accidents are caused by brake malfunction. The brakes, like all equipment on a truck, must be regularly maintained and inspected.

Truck roll-overs are one of the most common causes of fatalities in trucking accidents. These can occur because of driver error, truck malfunction, low inflation of the tires, brake failure and highway conditions. Driving a commercial truck is a job and the driver is a paid professional. Additional factors and regulations come into play in trucking crashes that don't exist in car accidents.

In order to drive a commercial vehicle in Illinois, the driver must be tested and qualified for a commercial driver's license. Furthermore, in order to drive most trucks in Illinois, the driver must also pass a physical examination required by the Federal Motor Carrier Safety Administration. If any of these rules and regulations are not followed, violations can play a part in the investigation and prosecution of a trucking accident.

If you or a loved one has been injured by a trucking accident, you may have a personal injury claim. Please call Chicago Injury Lawyer Robert Kreisman 24 hours a day at 312.346.0045 or toll free 800.583.8002 for a free and immediate consultation, or fill out our contact form online.

Chicago Personal Injury Lawyer Blawg - Trucking Accidents
Contact Us
Practice Areas
Client Reviews
★★★★★
“We were devastated when our 31 year-old son was killed by a negligent driver. Kreisman Law Offices did everything to help us through this very difficult time, including coming out to the house several times which was a comfort. My wife and I were extremely pleased with Mr. Kreisman’s compassion and care for this very tragic and troubling time.” C.B.
★★★★★
“Bob Kreisman did everything possible in handling the trial of this case. It was devastating that I traumatically lost my leg above the knee in this truck accident. However, it was not an easy case to win. His staff was so prepared for the trial that it was not surprising that the settlement offers continued to rise until we finally accepted the multi-million settlement while the jury was still deciding the case. My wife and I were delighted that we could secure our future with this settlement. We thank Mr. Kreisman and his incredible staff for working so hard for our benefit.” T.P.
★★★★★
“My mother died because doctors dropped the ball. I called Robert Kreisman and he immediately set up an appointment for my entire family. We met at his offices and I was very comfortable that he would do the best for my dad and my brothers. He spent hours with all of us in preparing for depositions and he hired top notch experts, all of which contributed to an incredible settlement before trial. I know that he is dedicated to his cases and particularly to the people he works for and the people who work with him. He continues to be generous in contributing annually to my mother’s memory and to make known to the public the signs and symptoms of brain tumors.” V.S.
★★★★★
“My dad was ignored and mistreated at the nursing home that we placed him in. It didn’t take long for us to realize that we made a big mistake, particularly after my dad developed these terrible bedsores. We transferred him as we were contacting Mr. Kreisman. He was referred to us by a lawyer we have known for a long time and respect his opinion. Mr. Kreisman and his staff worked tirelessly to resolve this case. We were fortunate to have his services and will recommend him to anyone.” T.J.
Submit a Law Firm Client Review