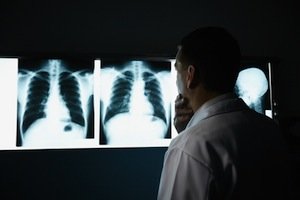 Radiology is a specialty field in medicine primarily dealing with the interpretation of diagnostic films such as CT scans, MRI, x-rays, ultrasounds, sonograms and other methods of imaging. Radiologists are often called in to review these scans for injured or ill parties for diagnosis of internal injury, bleeding or fractures.

According to the National Institute of Health (NIH), radiology is one of the specialties most likely to be the subject of claims of medical negligence, usually stemming from a failure by a radiologist to correctly read and interpret a radiographic. In a 2012 report, the NIH said reading errors by radiologists usually arise from poor technique, lack of knowledge and experience or failures of perception. Failure to diagnose accounts for about 40-54 percent of radiology-related medical malpractice cases, according to the NIH.

Radiologic “misses” typically are one of two types: either missed fractures or missed diagnosis of cancer. The most commonly missed fractures are in the cervical spine, the femur and the navicular bone, which is a bone in the foot. The second type of “miss” is failure to diagnose cancer. Radiologists often fail to spot bone tumors, colorectal carcinoma on barium enema studies, lung nodules on chest radiographs or breast lesions on mammograms.

When radiologists misread or misinterpret films, the patient can suffer severe consequences. Kreisman Law Offices has represented clients who have suffered as a result of radiology errors. With more than 40 years of trial experience in medical malpractice, the Chicago lawyers of Kreisman Law Offices have the knowledge and expertise to obtain justice for you.

For example, an Illinois man presented for a chest x-ray as part of a pre-employment physical exam. The radiograph was interpreted as normal except for a dense area in his right upper lobe. Instead of suggesting more specific exams to determine what it was, the radiologist diagnosed it as probably being an artifact. (In radiology, an artifact is anything artificially made; for example, electronic signals may appear as an artifact in an image with as much strength as the signals produced by the real objects, confusing the radiologist, who might misread the results of the examination.)

When the patient returned later with complaints of weight loss and a cough, he had a repeat chest x-ray that showed a large tumor in the same region as his prior scan. What had been diagnosed as an artifact, turned out to be cancer. The patient died six months later because the radiologist saw an abnormality on the radiograph, but rendered an incorrect diagnosis.

Radiology errors can result not only from the radiologist misinterpreting a scan, but from a lack of communication between the radiologist and the other treating physicians. Take for example the case of a Chicago pregnant woman who presented to the emergency room with vaginal bleeding. She was immediately sent for an ultrasound to assess her baby's health. The test showed little to no fetal movement. But instead of instantly advising her obstetrician of this, the radiologist simply wrote the result in the chart. Because of the delay in her obstetrician getting the results, her baby was not delivered for another hour. The baby survived, but was left with permanent brain damage.

If you or someone you love has suffered from a radiology error, please call us for an immediate free consultation. With more than 40 years of experience in trying and settling radiology error cases, Chicago's Kreisman Law Offices provides the best possible services to our many clients and achieves unsurpassed results. Please call us 24 hours a day at 312.346.0045 or toll free 800.583.8002 for a free and immediate consultation, or complete a contact form online.

Chicago Medical Malpractice Attorney Blog - Radiology Errors
Contact Us
Practice Areas
Client Reviews
★★★★★
“We were devastated when our 31 year-old son was killed by a negligent driver. Kreisman Law Offices did everything to help us through this very difficult time, including coming out to the house several times which was a comfort. My wife and I were extremely pleased with Mr. Kreisman’s compassion and care for this very tragic and troubling time.” C.B.
★★★★★
“Bob Kreisman did everything possible in handling the trial of this case. It was devastating that I traumatically lost my leg above the knee in this truck accident. However, it was not an easy case to win. His staff was so prepared for the trial that it was not surprising that the settlement offers continued to rise until we finally accepted the multi-million settlement while the jury was still deciding the case. My wife and I were delighted that we could secure our future with this settlement. We thank Mr. Kreisman and his incredible staff for working so hard for our benefit.” T.P.
★★★★★
“My mother died because doctors dropped the ball. I called Robert Kreisman and he immediately set up an appointment for my entire family. We met at his offices and I was very comfortable that he would do the best for my dad and my brothers. He spent hours with all of us in preparing for depositions and he hired top notch experts, all of which contributed to an incredible settlement before trial. I know that he is dedicated to his cases and particularly to the people he works for and the people who work with him. He continues to be generous in contributing annually to my mother’s memory and to make known to the public the signs and symptoms of brain tumors.” V.S.
★★★★★
“My dad was ignored and mistreated at the nursing home that we placed him in. It didn’t take long for us to realize that we made a big mistake, particularly after my dad developed these terrible bedsores. We transferred him as we were contacting Mr. Kreisman. He was referred to us by a lawyer we have known for a long time and respect his opinion. Mr. Kreisman and his staff worked tirelessly to resolve this case. We were fortunate to have his services and will recommend him to anyone.” T.J.
Submit a Law Firm Client Review